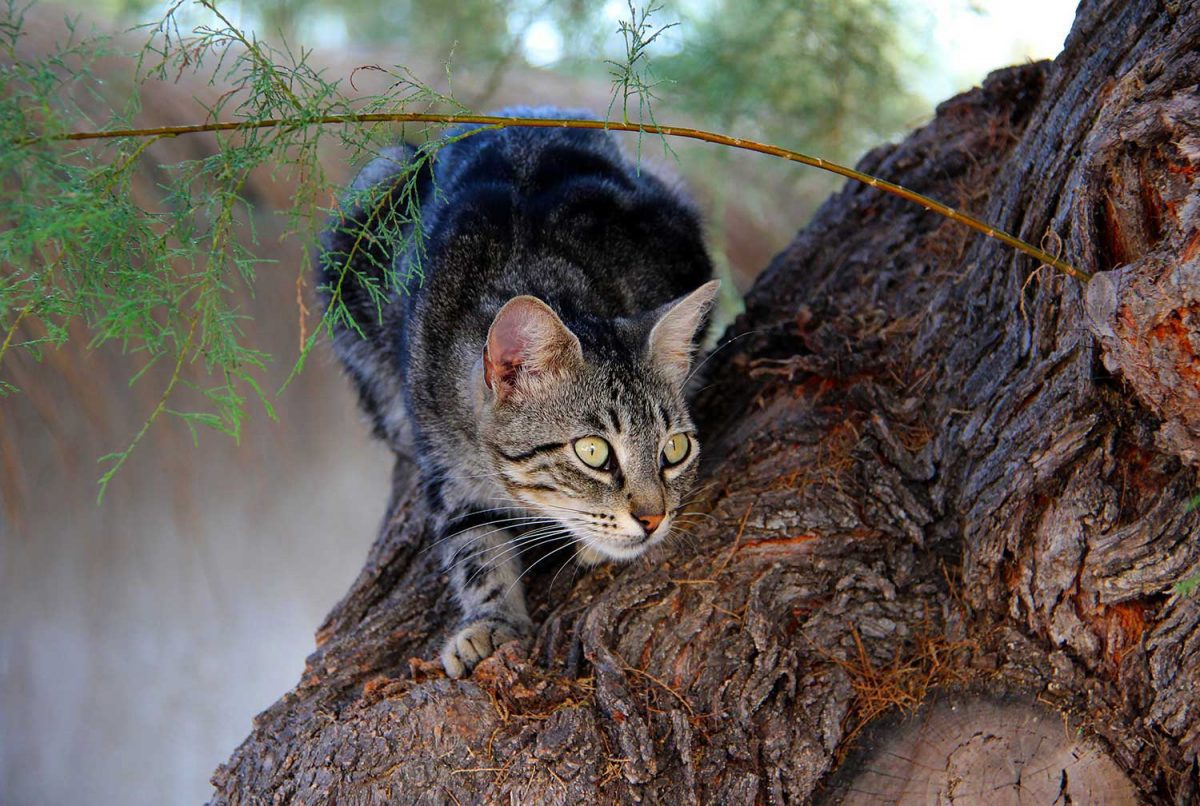 How do I stop my cat from attacking wildlife?

Our furry friends love to roam around outside and walk in the paw marks of their feline ancestors. But as cat owners, we need to confront the risk our kitties can pose on other animals and birds. Below, Cat in a Flat looks into how we can stop cats from attacking wildlife.

Why do cats attack wildlife?

Mr Whiskers might think he’s bringing you a precious gift, but no one wants to find a dead bird or mouse on the carpet. Cat owners might wonder why their pets go out and kill animals when you’re serving them delicious meals at least twice a day. Many cats don’t even eat their prey. The simple fact is that cats are animals driven by instinct, and one of their hard-wired impulses is to chase and kill birds, rodents and other small animals. It’s the same instinct that drives Mr Whiskers to chase a toy or pounce on a piece of string.

Of course, some people own cats for precisely this reason – to control mouse or rodent populations. Humans probably domesticated cats because of their ability to control rodent populations and protect grain stores. A house with a cat in it is still less likely to have a mouse problem – mice are terrified of just the smell of a kitty so stay away from feline-friendly homes. However, cats are responsible for destroying populations of birds and mammals, and it’s our responsibility as cat owners to prevent this. In Australia alone, cats have helped to drive 20 native mammal populations to extinction. A 2013 study in the US found that domestic cats are the top human-caused threat to wildlife in the USA, killing up to 3.7 billion birds and 22.3 billion mammals every year.

You can’t change this killer instinct, so if you want to stop your cat from attacking wildlife, you will have to change the way you manage their behaviour.

Why does my cat bring me dead animals?

Cats tend to drag their somewhere safe to finish the kill or eat it, and this is one reason dead birds and mammals often end up in the home. Cats in the wild will bring prey back to her kittens to teach them to hunt or for them to eat. When your cat brings animals back to the home, it might be that they consider you to be their family and want to teach you to hunt, or make sure you have enough to eat!

Why does my cat chirp or chatter at birds?

When kitties can’t reach their prey – like when they are staring at birds out of a window – you might notice them making a distinctive chirping or chattering noise. There are many different theories of why this happens that you can read more about in this Cat in a Flat blog. It seems that the thrill of excitement of spotting prey, mixed with the frustration at not being able to reach it, is the leading cause of this curious behaviour and noise.

How to stop your cat from attacking wildlife

Follow our tips below to help stop Mr Whiskers from bringing in unwanted presents.

The simplest way to keep your cat from attacking wildlife is not to let them outside. The perception and likelihood of keeping cats indoors range from country to country. In the UK, for example, only about 10% of pet cats are kept exclusively indoors, and many cat charities won’t let people without safe outdoor access adopt a kitty. However, indoor cats are much more common in other countries and are becoming less rare in the UK. Many cat owners worry that keeping your cat indoors limits their quality of life. If you plan to keep your cat indoors, make sure they have plenty of toys, perches and human interaction to stimulate them mentally and physically. If you are one of the many households with an outdoor cat, try controlling where and when they can go outside with our tips, below.

If you still want Mr Whiskers to go out and sniff the fresh air, it might be wise to create a controlled area that they can explore. If you have the means and space, you could try covering your garden or creating a cat run or “catio”. Remember that cats are crafty creatures and can fit through small holes, so you’ll need to maintain and check any container regularly. You could also try and train your cat to use a harness so you can walk them in nature in a controlled manner.

Control the times your cat can go out

Cats are crepuscular, which means they are more active at dawn and dusk. These times are also more likely to be when birds and small mammals are out and about. Keeping your cat inside during this time makes it much less likely they will attack and kill wildlife. Similarly, the period following a spell of bad weather is more likely to see birds and mammals venturing out, so try and keep Mr Whiskers inside if you can. Keeping your cat in at these times is particularly important in summer months when kitties and their prey are most active. A cat flap with timed opening and closure can help manage your cat’s access to the outside, as does feeding your kitty at these times.

Should I keep my cat indoors at night?

Many cats are more active at night, and their highly-developed senses make them excellent hunters in the dark. Cats Protection League recommends keeping your cats indoors at night to prevent wildlife predation and because our kitties are most at risk from road accidents, and attacks from other animals and humans between dusk and dawn.

Play with your cat more to stop them from attacking wildlife

Although most domesticated cats hunt prey due to instincts rather than hunger, it could be that your kitty is trying to augment its diet if it keeps catching and eating birds and mammals. The University of Exeter study found that cats with a meat-based diet were less likely to hunt and kill prey. It could be that birds and mammals provide nutrients that cats can’t get from some cat foods, especially ones that contain plant proteins.

Important: Don’t punish your cat for hunting or bringing in prey. Kitties are simply following instincts, and admonishing them is only likely to make them scared of you, not less likely to hunt.

A recent study by the RSPB found that cats with a collar that jingles kill 41% fewer birds and 34% fewer mammals than those wearing an ordinary collar. And cats wearing a collar with a sonic device killed 51% fewer birds and 38% fewer mammals. Other studies, such as the one from the University of Exeter found that bells on collars had no real impact on predation success as cats learned to hunt effectively while wearing a bell. According to the University of Exeter study, however, a bright and colourful BirdsBeSafe collar reduces songbird predation by up to 42% though it has no noticeable effect on mammal hunting. Songbirds can easily see colour, so an oversized and bright collar helps stop cats sneaking up on them.

Important: Whatever collar you get for your cat, make sure it has easy release so that your kitty doesn’t get caught on anything.

Read the Cat in a Flat blog for more tips on cat care, including 6 tips for feeding your kitty and why our furry friends don’t like water.

Why do cats chatter at birds?

Why are cats scared of cucumbers and other curiousities

Why do cats bite?